The Subcommission is in charge of carefully selecting and defining Global Stratotype Sections and Points (GSSPs) for Series and Stages, with the primary objective to provide optimum clarity and stability for the Neogene Chronostratigraphic Scale. We are also here to promote studies and promulgate information on the evolution of climate and the biosphere during the Neogene.

The two remaining stage boundaries, base-Langhian and base-Burdigalian, and the selection of criteria and sections for their definition represent primary objectives.The recognition of a formal Quaternary Period/System (ratified by IUGS in 2010) in place of the latter part of the Neogene, the so-called “Gelasian shift”, has met with major concerns as to the stability of literature and principles of chronostratigraphy.

The incorporation of Quaternary is a paradigm shift in the geological time scale and resulted in opposing positions among Neogene researchers (e.g, Hilgen et al., 2012 in the GTS2012).

Due to this absence of consensus amongst Neogene stratigraphers, we believe that it is appropriate to leave the discussion open with respect for the two main traditions, the Neogene marine and Quaternary continental, in the chronostratigraphic subdivision of the younger part of the Cenozoic.

The Subcommission, however, should work to avoid “the increased potential for conflict between disciplines intent on recognition of their special interests in the time scale” (note from Van Couvering et al., 2009). 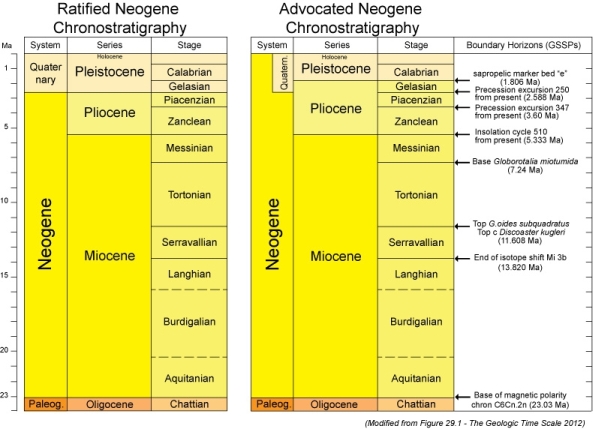